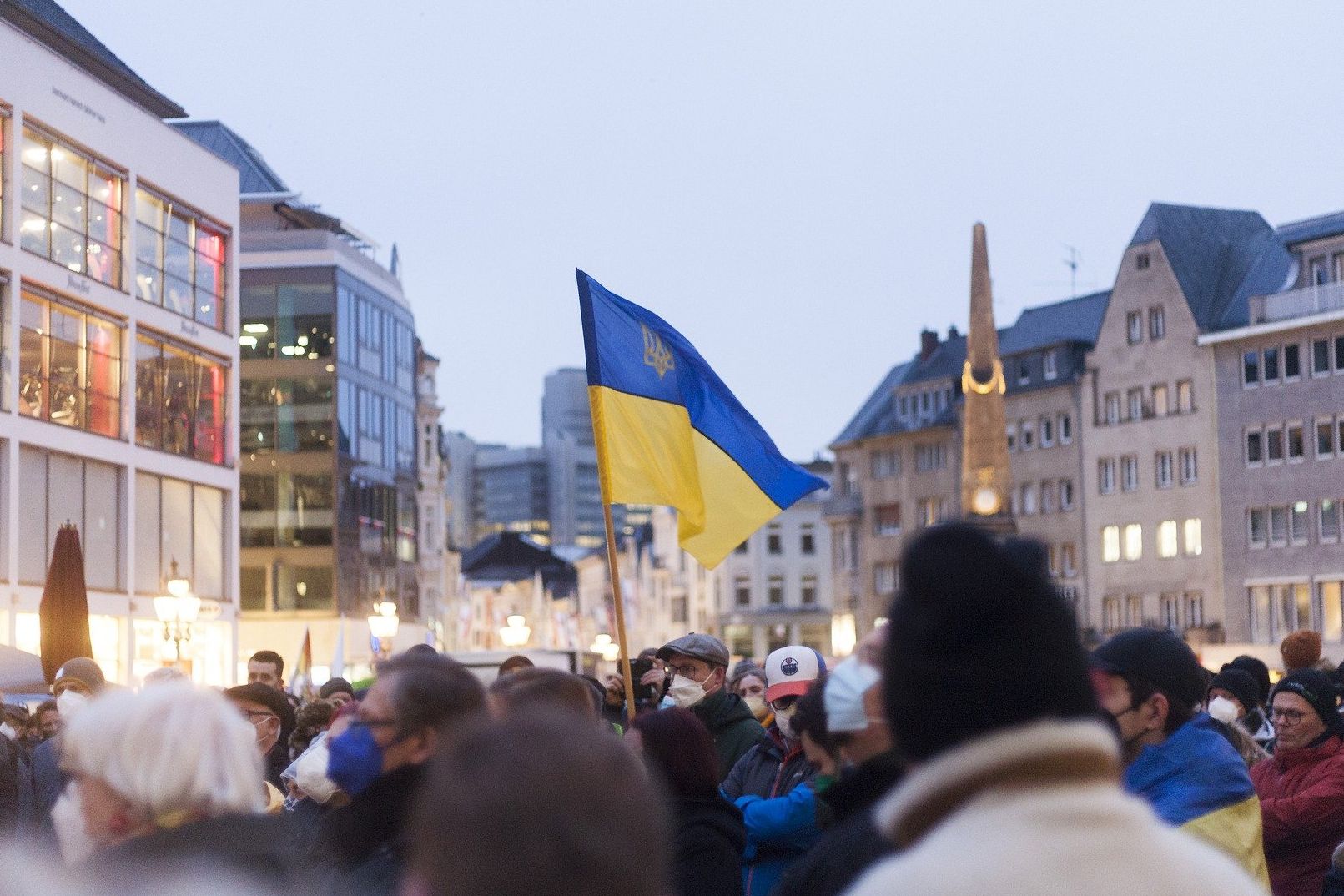 Yvonne Kleinmann: Katia, just some sentences about you?

Kateryna Pasichnyk: My name is Kateryna, I was born in Vinnytsia, Ukraine, but after graduating from high school I wanted to continue my education outside my hometown. I chose history as my professional interest and studied it in Kyiv, then in Budapest and finally at the University of Halle. After the pandemic began, I decided to spend more time with my husband in Kyiv. I had gathered all the sources I needed for my dissertation in previous years, so I could easily work from home and attend meetings with colleagues online. I had planned to return to Halle on March 26 to work in libraries and discuss my work in person, but the flight was cancelled because of the war in Ukraine.

Katia, during the last months you were working on your Ph.D. project in Kyiv. When and how did you recognize that the political situation is changing. And under which conditions have you left Kyiv?

At the time when Russian troops were beginning to pile up near the Ukrainian border and European and American news began to talk about an invasion. My husband and I did not believe in a full-scale war at first. Since December, we had been closely following the news and became more inclined to fear that an escalation would happen in Donbass and that Putin used Ukraine to blackmail the Western powers. But the anxiety of a larger war was there, it came and went in waves. We read about the embassies leaving Kyiv, but became even more alarmed when on February 13, we read the news about Ukrainian oligarchs and businessmen fleeing Kyiv. Since my husband and I both work from home, we decided to go to Vinnytsia and work there for a while, took our cat and went there by train. We did not leave the capital when it was already attacked. In fact, we were seriously considering going back home at the end of next week, but when I woke up to a siren on February 24, I was absolutely terrified. Without reading the news, I knew immediately that Putin had started a war.

You have returned to your hometown Vinnytsia, a city with around 370.000 inhabitants in Western Ukraine, about 100 km from the Moldavian border. Could you describe everyday life there during the last week?

The first few days were especially hard. We simply could not believe that this was not a nightmare, but a new reality. We could not take our eyes off the phones and TV screens, horrified by the unfolding military aggression. We still constantly follow the news and talk to others on the phone. We have friends and relatives stranded in settlements surrounded by hungry and ill-equipped Russians, where there are problems with electricity and food supplies. In the first few days we saw many people fleeing from Kyiv, and took some in for the night at our house. Two of them stayed with us. We have relatives who enlisted in the Vinnytsia territorial defence. Many centers have appeared to collect food and basic necessities for the military and refugees, lists of necessary items are published daily in special telegram channels. We try to bring something to the collection centres every day. When there was a call to knit nets for the military, my two friends and I went there. Several basement rooms were filled with people, mostly women. There was no place to sit down! Everyone wanted to get involved, to help even a little. My mother taped up windows in the building where she worked. People brought sandbags to fortify administration buildings. Restaurants continue to supply meals for the territorial defence. Because my husband's father has a car, he delivers supplies from place to place when the need arises. From Vinnytsia or through Vinnytsia deliveries of supplies go to Kharkiv and Kyiv. I have tried to contact all of my foreign friends, asking them to donate to the Ukrainian army and humanitarian aid. We do the same here. Some of us who can work from home continue to do so, so we can donate further and maintain our existence. Every day I receive messages from my friends abroad offering help, and I keep in touch with many people who ask me if my family is safe. I have received several messages from Russians, some of them completely absorbed in Russian propaganda. Other Russian people I know are silent. Silence is a frequent reaction, even from relatives who live there. Often, we wake up to the sound of air-raid alarms. We know, there will be more during the day.

The town itself remained intact, which cannot be said about the region. Already in the first day of war, the military depots in Kalynivka, Tulchyn and village Bokhonyky were shelled form the air. Three soldiers died in Kalynivka. Although this was military infrastructure, the depots were also located near residential areas, where civilians live. The explosions caused shock waves that blew out the window panes of people's houses. People were injured by the broken glass and were forced to leave their homes. The air is carefully monitored by our military, and any hint of danger triggers an air alert, there are numerous roadblocks throughout the region. As for the town’s infrastructure, administration functions only partially, public transport works, we have no problems with water, electricity or products. Grocery stores are open and work on a reduced schedule, as are pharmacies, but sometimes it is difficult to find basic medical supplies, such as bandages, or some specific medicines because of broken supply chains. Schools and kindergartens are closed, and online education has not been launched yet. There is a curfew.

How has your own and your family‘s life changed?

We live like hostages, watching the Russian military attack nuclear power plants and our cities and towns, with no clear idea of what will happen next. It's scary to think about the future. Life is suspended, and we want it to be over and for the aggressors to be driven out of the country. At the same time, there is an unprecedented rise in patriotism and solidarity among the Ukrainian people. We are very united and stand with our president, military and civilians, supporting those in dire need of humanitarian corridors.

Who is currently supporting refugees from Kyiv and Eastern Ukraine? And is the city’s infrastructure sufficient?

Vinnytsia is a transit point for many refugees fleeing further west. Many buildings and basements have been converted into shelters with the help of the town administration. The restaurant sector provides food. There are several volunteer stations. As I said, communication is done through special channels. People also write to each other. Help comes in seconds. All of the interest groups have turned into aid groups. Yesterday in one of them people asked where they could spend the night in Vinnytsia. Before I even had time to answer, there were already people ready to help. So, yes. I would say the town’s infrastructure is sufficient.

Are people from Vinnytsia fleeing, too? And do you have any plans to leave the country?

Some people flee, but it is not happening on a massive scale. Many people stay here. Vinnytsia is still a relatively safe place, and people are needed here to sustain life, as well as to help those towns and people under attack or confined by Russian troops. I have no plans to leave the country either. I don't want to leave my husband and elderly members of our family who just can't escape. The oldest member of our family is 92 years old. I don't want to be forced to leave the country because of the despicable war, I want to have the right to go abroad in peacetime. I will have to leave if war engulfs my region and the "Russian world" knocks on my door. We strongly hope that this will not happen.

Does Vinnytsia as well as towns in the region get any support from foreign twin cities or neighbouring countries?

A large portion of the support comes from Poland and Lithuania. Large donations and humanitarian shipments come from the twin city Panevėžys in Lithuania. The Polish twin town Kielce receives refugees as well and provides humanitarian help. Other Polish towns, like Tarnów and Radom were the first to send necessary medical means to our town. Medical means also came from the Rumanian town Suceava. There are also many offers of help and donations from other European countries and the United States.

You have grown up in independent Ukraine after 1991. Could you explain to us, what this war means to you in this context?

I was born already in independent Ukraine; I don't know any other Ukraine, despite the existing Soviet legacy. I have always been acutely aware that Ukraine is a young country, that it has many problems to solve, but also that there are many people working for its cause. The notion that Russian and Ukraine are "brother nations" has always been incomprehensible to me, and thanks to my history education I knew where this construct came from. I don't think in such terms, and most Ukrainians don't, and the two revolutions explicitly showed that. Now, in the context of the war, Ukrainians are incredibly angry that Putin and a large part of the Russians think they have the right to come in uninvited and "save us," bringing death, suffering, and pain to Ukrainians. Such paternalistic thinking literally makes me sick. I hope that we will win; I hope that I will have a chance to participate in the recovery of my country, and I hope that the described Russian attitude, which for some is almost a worldview, will collapse. Seeing the solidarity of the people and the tremendous international support, I pray that my country will have a chance for the future.

Which kind of support do you expect from Martin Luther University in Halle, where you have spent the last three years, and other German universities? And could you imagine concrete projects?

I encourage all people to donate to various humanitarian projects that help refugees and civilians. Here is a quite comprehensive list of different options:

But I will also take this opportunity to ask Martin Luther University to encourage short- and long-term scholarships for Ukrainian students and researchers. I personally know many of them who are now hiding in shelters in Kyiv and its surroundings, those who work or study in the University of Karazin, whose buildings were damaged by rocket fire. Other scholars live with their families in safer cities, doing volunteer work, or helping out the members of their families. We all want to return to a normal life. Financial support and opportunities would help such people return to their research and projects, but more importantly, to their hopes, desires and plans for the future, and would contribute to the restoration of Ukrainian academic life.

Thanks a lot for sharing your experience with us! We will spread your call.